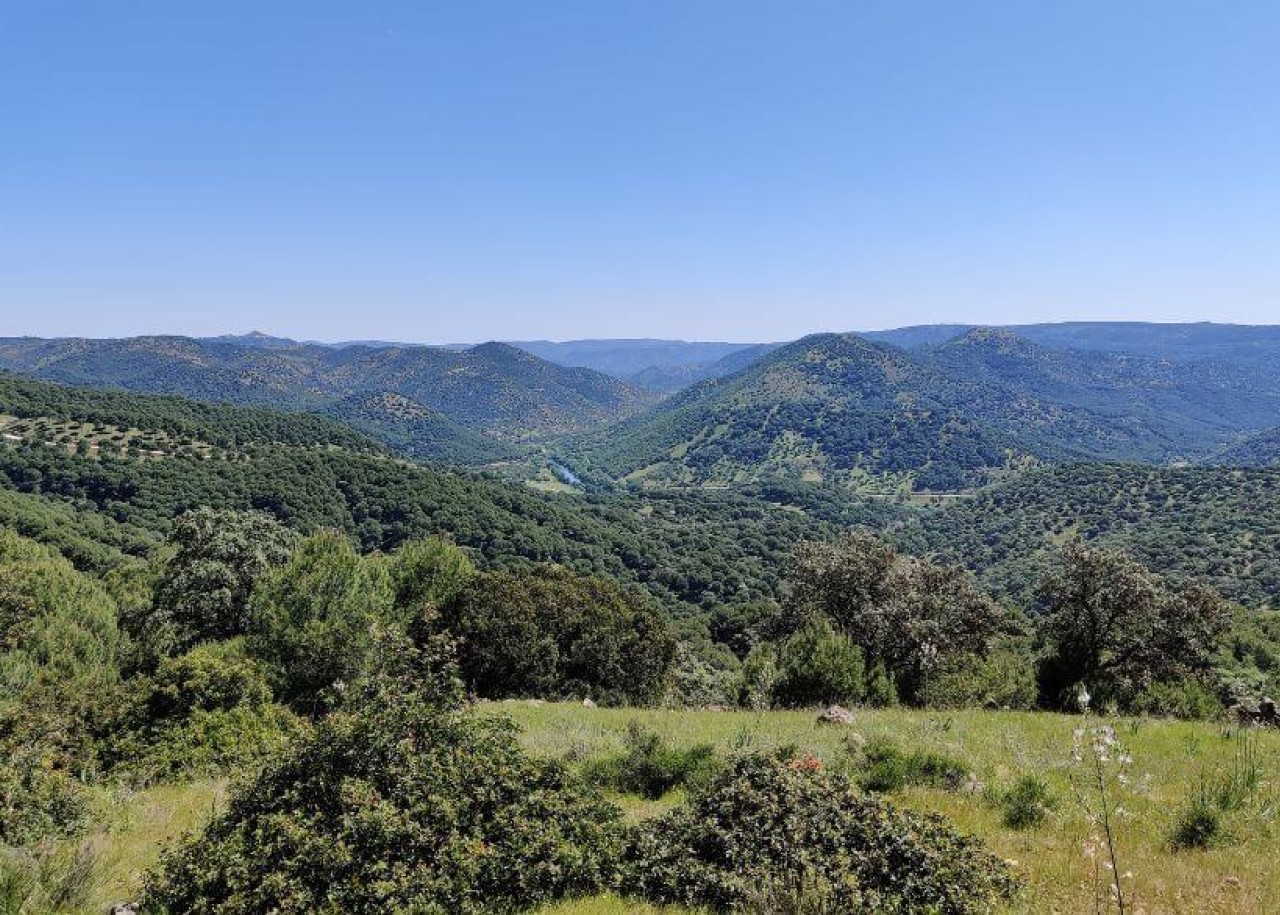 In the northwest of the province of Jaén is the Sierra de Andújar Natural Park, in the heart of the Sierra Morena.

Since 28 July 1989, this enclave has been declared a Natural Park, which covers an area of 74,000 hectares and encompasses four municipalities: Andújar, Baños de la Encina, Villanueva de la Reina and Marmolejo.

The Sierra de Andújar Natural Park is a protected natural area, characterised by the gentle undulations typical of the Sierra Morena landscape, where the Mediterranean forest is its maximum exposure.

Its altitude varies between 400 and 1,290 metres above sea level and provides a glimpse of spectacular typical mountain landscapes where you can enjoy a variety of activities with low environmental impact.

In addition to its incalculable natural values, the Sierra de Andújar Natural Park is known for being home to the Sanctuary of the Virgen de la Cabeza, in the Cerro del Cabezo. Every year in April, its pilgrimage is celebrated and attracts tens of thousands of people from all over Spain, making it the oldest pilgrimage in the country. In addition to this, there is a considerable archaeological and ethnographic heritage represented, among others, by sites dating back to prehistoric times.

Much of Spain"s flora and fauna are represented in the Sierra de Andújar Natural Park. Its excellent geographical location, its Mediterranean climate, the orography, the good state of conservation of the natural park and the minimal presence of visitors, who do not alter the ecosystems, make this enclave a place of absolute tranquillity for plant and animal species.

In the landscapes of the Sierra de Andújar Natural Park, there are open grassy areas, ravines and shady slopes, as well as magnificent formations of the most typical Mediterranean forest.

Throughout its extension, we can find species of holm oaks, cork oaks and oaks, as well as gall oaks, in its most humid areas, and species of stone pine, the result of reforestation of vegetation. The scrubland formations are characterised by species of kermes oaks, mastic trees, junipers, strawberry trees, rockroses and aromatic plants. The riverside vegetation, which is quite common in the Sierra de Andújar Natural Park, boasts species of willows, alders, myrtles, ash trees, etc.

As far as fauna is concerned, the Sierra de Andújar Nature Reserve is known for its endangered animal species, such as the Iberian lynx, the wolf and the imperial eagle. Mammals, such as the wild cat or the mongoose; game species, such as the deer and the wild boar; birds such as the black vulture or the peregrine falcon; reptiles, amphibians and fish can be seen throughout the protected area.

The Sierra de Andújar Nature Reserve, most of which is occupied by private hunting estates, is a sanctuary of tranquillity criss-crossed by stealthy paths and trails that must be explored in order to discover its beauty.

In its more than 70,000 hectares of land, you can enjoy different activities any day of the week:

- Flora and fauna observation. The plant and animal species in the Sierra de Andújar Natural Park are of considerable environmental, cultural and tourist importance. Many companies offer routes to see the most characteristic species of the park.
- Bird Watching. Bird watching is one of the tourist attractions of this protected natural area. Take a pair of binoculars and don"t forget a field guide to find the birds you would most like to see. The Sierra is home to 178 different species of birds.
- Photographic safaris. This consists of adding photography to the observation of animal and plant species, using various sport hunting techniques, known as photographic hunting. However, don"t forget not to disturb the species and to be a mere spectator.
- The rut. In September, the stag, the undisputed king of the Sierra de Andújar Natural Park, prepares to compete in a fight for the favour of the females. The males are visible at any time of the day and the females graze quietly while waiting for the winner.
- Fishing in the different reservoirs of the park.
- Water activities with low environmental impact, such as canoeing, canoeing, kayaking or pedal boats.
- Hiking. There is a diverse range, from easy and short trails to large circuits for which adequate physical preparation is required.
- Pilgrimages. In the Sierra de Andújar is the Basilica of the Royal Sanctuary of the Virgen de la Cabeza, which welcomes any pilgrim. Alone or with organised routes, you can visit this tourist enclave.
- Enjoy spectacular scenery with mountain bike routes.
- Starlight Reserve. The sky of the Sierra Morena region has been declared a Starlight Reserve and Tourist Destination. A sky free of light pollution to contemplate the firmament.
- Hiking.

Thanks to the diversity of routes and the great extension of the Sierra de Andújar Natural Park, we can enjoy spectacular landscapes and viewpoints, reservoirs and recreational areas where we can spend a wonderful day surrounded by the magnificent nature of Jaén.

In the Sierra de Andújar Natural Park you can enjoy many hiking routes, some very short and easy to do and others more difficult and requiring more preparation.

- Northern Route, on the El Junquillo path: 5.7 kilometres. Along the route, you will come across farms dedicated to livestock and hunting, surrounded by holm oak forests and pastureland formations. At the end of this route, we can make out Sierra Quintana, with the highest peak in the Sierra de Andújar Nature Reserve, Burcio del Pino, at 1,291 metres. You can also see the village of Fuencaliente in the distance, outside the province of Jaén, in Castile-La Mancha. If you want to continue with this route, we can do it on horseback, up to the Valmayor River Viewpoint.

- Ruta del Toro Bravo: it has a length of 86kms and can be done through three different trails. It can be done by 4x4 or mountain bike.
o The Los Cuatro Términos trail is 4 kilometres long and leads to a hill where four municipalities coincide: Andújar, Villanueva del a Reina, Baños de la Encina and Mestanza (Ciudad Real). It is a mountain route that crosses very little travelled areas covered by forests of holm oaks, cork oaks, gall oaks and strawberry trees.
o Cerrillo del Plomo Path: 1 kilometre long. Special care must be taken not to leave the signposted path, as there is a risk of falling into an old well. It allows you to enjoy the typical vegetation of the Sierra Morena and some traces of the mining history that has shaped the landscape of these mountains.
o Pozo Nuevo Path. 1.7 kilometres long. The origin of the route is the old mining railway, one of the most common activities in the municipalities of the Sierra de Andújar Natural Park. The route ends at the old Pozo Nuevo mine.

Find information on all the routes, duration and distance here: https://sierradeandujar.com/rutas/ 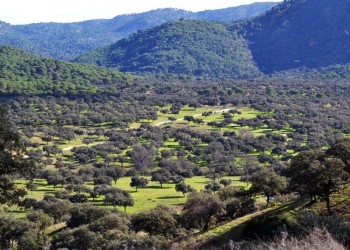 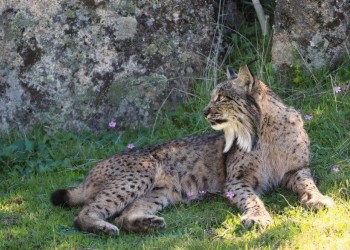 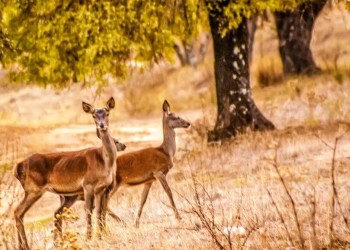 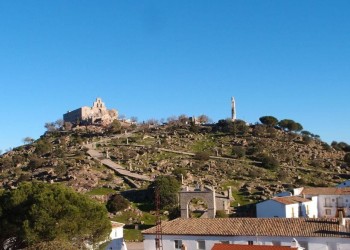 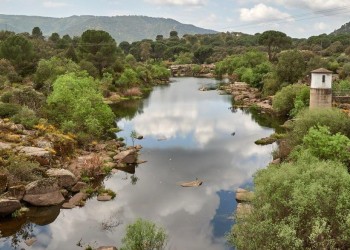 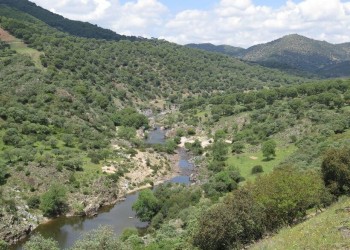 How to get to
Sierra de Andújar Natural Park